We love GW games.  But we also enjoy games from other companies!  In fact, we play a bunch of them.  Below is a list of some of the non-GW games that are regularly played by members of the club.

Conquest – the Last Argument of Kings is a mass battle wargame produced by Para Bellum Wargames. The rules of the game have been written by one of the industry’s lead game designers, Alessio Cavatore and his studio Riverhorse. The rules are quick and easy to learn for a new player but are still able to offer a new and complex strategy to master. Conquest does away with player turns and army deployment. Instead, it focuses its play around the command stack mechanic, where each player determines at the beginning of the round what order his troops are going to be activated in. Coupled with a unique escalation reinforcement mechanic where light, medium and heavy troops each have their roles, the fog of war is a very real thing. 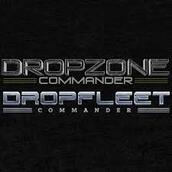 Marvel: Crisis Protocol is a tabletop hobby miniatures game set in the Marvel Universe. Players assemble, paint, and collect an ever expanding line of highly detailed plastic miniatures representing iconic Marvel characters. Players choose characters from their collections to form their own Marvel inspired dream team and then pit their chosen forces against each other on an interactive tabletop where the very terrain itself can be thrown, crashed into, and destroyed during the super powered showdown.

Team Yankee is a book written by Harold Coyle in 1987 about a fictitious Soviet attack into Germany from the viewpoint of Captain Bannon commanding Team Yankee, an Armour-heavy Combat Team in the US Army. It’s also a stand-alone game released by Battlefront. The Team Yankee range includes tanks, helicopters, aircraft and other armoured fighting vehicles, artillery and infantry. The range will be expanding to include a wide variety of nations that you can refight the Cold War on your tabletop.

Malifaux, a twisted mirror of an alternate Earth in the 1900s; a world of gothic horror, Victorian structures, steampunk constructs, and wild west gunslingers. Rife with undead amalgamations, monstrous vengeful apparitions, and other creatures that bump in the night, these near-lawless lands are still worth treading for some, as the Soulstones deep within the cavernous catacombs are worth more than the sweat and blood it takes to obtain them.
The lure of Malifaux’s valuable Soulstones has brought the powerful, the desperate, the ambitious, and the cunning to Malifaux from Earth. The Guild’s control of the Breach ensures that it remains a dominant power within Malifaux City, but it is challenged on all sides by the sabotage and magical prowess of the Arcanists and the shuffling undead that serve the foul Resurrectionists.
The Outcasts, a loose collection of mercenaries and other ne’er-do-wells, sell their services to the highest bidder when not pursuing their own individual objectives, and the mysterious Ten Thunders crime syndicate works from the shadows to extend its influence throughout the city.
Not every threat to Malifaux comes from Earth, however. The ancient Neverborn will not easily surrender their lands to what they see as foreign invaders, and the Gremlins of the Bayou have become quite powerful by learning from and mimicking the humans that seized control of Malifaux City.